Do you want to know how to play cornhole? Its rules are both short and fun! Plentifun will give you directions on playing this exciting game, and even if you are a total beginner, you will be hooked on in no time.

Do you want to know how to play cornhole? Its rules are both short and fun! Plentifun will give you directions on playing this exciting game, and even if you are a total beginner, you will be hooked on in no time. 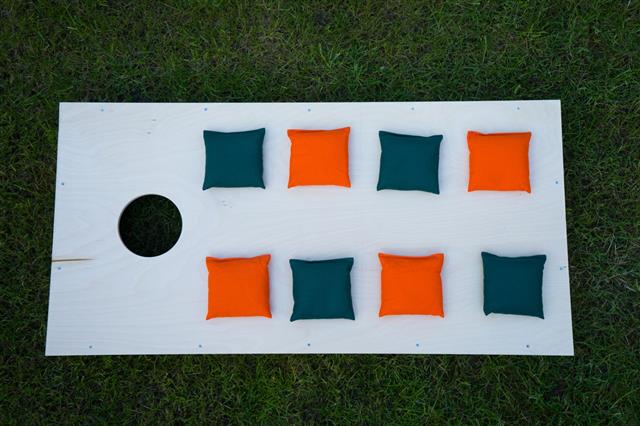 Ancient Native American tribes played a version of cornhole, in which the bags were made of the bladders of pigs. Beans were used as a filling.

Cornhole is a game in which players toss corn bags at a raised plywood platform placed about 9 yards (27 feet) away, with the intent of lodging the bag in a circular hole in the platform. Landing the bag in the hole nets a player 3 points, while landing the bag on the board alone gives 1 point. The team to reach the 21 points first, with a difference of 2 points, wins. The game consists of two rounds, or as is popularly called, ‘innings’.

The history of cornhole is unclear, though it is said to have originated in Germany in the 14th century, and rediscovered in Ohio later. There are rumors that a local Iowa farmer by the name of Jebidiah McGullicutty discovered it in the 19th century. Historians agree that several Native American tribes played similar games for entertainment. Since then, the game has rapidly spread throughout America, and has become very popular.

The wooden board is a slanting platform, with its one side higher than the other. A circular hole, which is the main target, is nearer to the higher end. The cloth bag used for tossing contains corn feed. The other names for this game are Tailgate, Bean Bag, Bean Toss, Corn Toss, and even Bag-O.

☞ The game can be played in two teams of one or two players each.

☞ The cornhole boards must be separated by a distance of 24 feet for casual games and 27 feet for official competitions.

☞ The game begins with a coin toss to decide which team will begin. Alternately, the winning team of the previous game can start.

☞ The front edge of the cornhole board will be regarded as the foul line, behind which the player must stand while throwing.

☞ Teammates have to stand opposite to one another, beside each board and have to toss bags at the board opposite to them. The player must pitch the corn bag with an under-hand throw.

➔ Each corn bag should be made from a 6″ by 6″ square fabric with a double-stitched seam at each of the four edges. The filling should be about 1 pound in weight.

☞ The area beside each cornhole board is called the pitcher’s lane. Players have to stand in this lane and throw their corn bags at the board on the opposite side. They must stay in this lane for the entire game.

☞ The bags have to be thrown alternately by players of the same team. After all four bags have been pitched, the players of the opposite team start tossing their bags in the same manner. This concludes one round of the game.

How are points scored?

♐ A bag that lies on the board, even if it hangs on the hole or the sides, will get you 1 point (called a ‘Woody’).

♐ A bag that passes through the cornhole will get you 3 points (called a ‘Cornhole’).

♐ A bag that touches the ground in any way will not bring in any point (called a ‘Dirty’ bag).

♐ If a bag hits another bag and knocks it off the board, the fallen bag will be placed back in its old place and the thrown bag will not be considered for any point.

☞ The winner of one round will start play in the next round. In case of a tie, the winner of the previous round starts.

☞ The game will continue until either team reaches or exceeds 21 points.

What is considered a foul?

✘ When a player’s foot crosses the foul line while pitching.

✘ A bag thrown out of turn.

Any point the player gets on fouling does not get counted.

☀ Tossing the bag at a higher arc may net you a cornhole.

☀ If a couple of bags are lying on the board in front of the hole, tossing at a lower height will knock them into the hole.

☀ While tossing, stand with the knees bent, leaning slightly forward.

☀ Try to aim farther than the hole, taking into consideration that the bags slide back down due to the slope.

☀ Take your first step with the leg opposite to your pitching arm.

☀ Try to toss the bag in a pendulum-like motion, rather than throwing it with brute force.

Before you rush to label it a ‘kiddie’ game, let me inform you that throwing a 1-pound bag into a 6-inch hole that is almost 30 feet away is not a piece of cake. But still, cornhole is fun and can be enjoyed by people of all ages, including kids. It’s great for family outings, and can basically be played anywhere.