Instructions to Play the Cranium Board Game

Cranium is an evolved form of Ludo. It's a board game, wherein a team of 2 or more players strive to reach the center of the cranium board, completing various skill-based activities. The game was created by two former Microsoft employees, Richard Tait and Whit Alexander. It is presently marketed and manufactured by Hasbro under the Cranium Inc. subsidiary. Plentifun explains the several rules and instructions to play this board game.

Home / Uncategorized / Instructions to Play the Cranium Board Game

Cranium is an evolved form of Ludo. It’s a board game, wherein a team of 2 or more players strive to reach the center of the cranium board, completing various skill-based activities. The game was created by two former Microsoft employees, Richard Tait and Whit Alexander. It is presently marketed and manufactured by Hasbro under the Cranium Inc. subsidiary. Plentifun explains the several rules and instructions to play this board game. 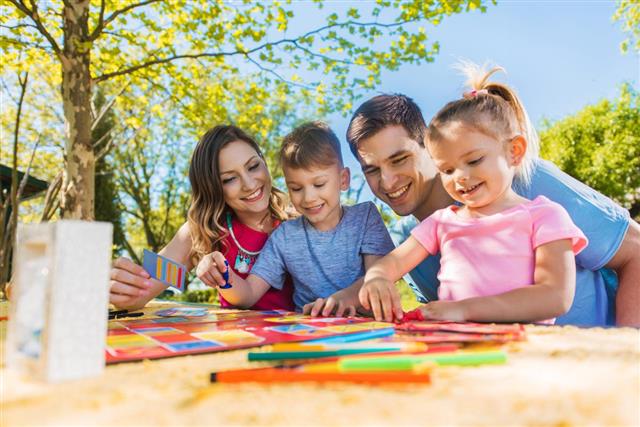 Did You Know?
Unlike other die games, where a player rolls first, Cranium requires the player to first complete an activity and then roll the die if he/she succeeds, followed by shifting the mover.

Cranium is quite easy to play once you understand the general rules. A minimum of 4 players in 2 teams is required to play this game; however, a team could have more than two players too. When starting the game from the ‘Planet Cranium’ space, or if one has landed on this space later, a player gets to choose a clue from any of the four stacks. Once a clue is drawn by a player, only the players from his/her team can make guesses (except for ‘Club Cranium’ cards). On every new turn, players should draw the first clue in the stack and place it at the back of the stack once used. The rules for a club cranium card remain the same throughout the game.

The game proceeds in a clockwise pattern, with the next player being on the left. The answer for each card is written inverted on the rear face of the card. The board has two paths; a scenic path and a fast-track path.

What’s in the Box?

There are 4 types of clue cards in the game, classified by the four colors of red, blue, yellow, and green. Let’s take a look at each type, to understand the gameplay better.

Word Worm (Yellow)
Word worms are all about word puzzles like scrambled words, lexicons, anagrams, and fill in the blanks.

Star Performer (Green)
All you need to do here is perform; then it could be anything from humming or whistling, to charades or mimicry. Choose this card if you prefer performing arts over question-answer stuff.

Creative Cat (Blue)
This one’s for the creative lot, and this is where the sheet of paper and clay turns useful. These blue cards contain ‘cloodles’, ‘sculptorades’, and ‘sensosketch’. In cloodles, one draws a sketch based on the clues given on the card. In sculptorades, the cranium clay needs to be used to make an item. In sensosketch, you will have to draw something with your eyes closed.

How to Play Cranium

Begin with setting up the cranium board; arrange the card stacks in the respective spaces provided for them, and let each team choose a playing piece. The chosen playing pieces should be placed on the purple ‘Planet Cranium’ space marked START. Both teams get a sheet of paper and a pencil for clues that need drawing.

Although the game requires teams to be formed, each player gets an individual chance to play. The player whose birthday is coming up next would start the game. Once this is decided, he/she would begin with choosing a card from any of the four stacks. In all cases, let the team to your right pick up the card for you from the respective stack and read it aloud, after which they could start the timer if required. You have to complete the activity successfully before the time runs out.

Check for the ‘Club Cranium’ or ‘All Play’ sign on the card. If a card is a club cranium card or an all play card, players from both the teams can take part in that particular activity. The first team to guess the correct answer gets a bonus roll. Then the team who initially drew the all play/cranium card plays its regular turn. (Note: An all play card pauses the game, and gives both the teams a chance to compete equally for a bonus roll. Drawing this card isn’t counted as a regular turn.)

When performing an activity on a card, check whether there is a time restriction. If yes, start the hourglass timer and begin the activity. If your team members guess the right answer, you roll the die and move your team’s piece to the first space of that color on the fast-track path. If the guess is incorrect, or if you do not succeed, your turn is over and you stay there till your next turn. However, on your next turn you should proceed along the scenic path.

Once you complete a circuit along either of the paths, you enter the cranium circle. Begin playing from the space matching the color on your die. If the color rolled is purple, choose any of the four spaces to start in.

Now, choose a clue card of the color matching the space you’re in. You perform the activity or answer questions like you did before including the club cranium rules. If you succeed at the clue card, you proceed to the next space clockwise, while keeping the card. If you don’t, you stay on the same space until the next turn.

Entering the Cranium Central and Winning

Once you have a collection of all 4 colored cards, the opposite team decides a category for you to draw a clue from. If you guess the clue correctly, your team wins the game. If not, play resumes. The winner is the first team to enter the cranium central and answer a clue correctly.

If both teams are in the cranium central and a club cranium card is drawn, the team to guess correctly first wins.