Carrom Rules and Regulations That’ll Help You Master the Game

It is essential to know the international rules and regulations if you wish to gain mastery over carrom. This article will give you more information on rules of the carrom board game.

It is essential to know the international rules and regulations if you wish to gain mastery over carrom. This article will give you more information on rules of the carrom board game.

The objective while playing carrom for a player is to be the first player (or the first team) to pocket all the respective pieces (black or white). The player or the team that pockets all his carrom pieces (carrom men) is the winner. It is not mandatory for the winner to pocket the queen.

The queen is placed at the center of the carrom board with six pieces encircling the queen, in alternate white and black order. On the outer side of the circle, the remaining 12 pieces are placed, again in the alternate white and black order. The pattern should be made such that the white pieces form a ‘Y’, with the queen as the center and the two upper segments directing to the pockets. In a single game, rival participants sit opposite to each other; whereas in a doubles game, players of the same team sit opposite to each other. Now let us know how the actual game is played.

The striker is used to shoot the other pieces in the game. In order to shoot the carrom men, the striker should be placed on the base lines (the parallel lines on every side of the board) such that it should touch both the lines. Secondly, if placed on the red circle at the end of the base lines; the striker should either completely cover the circle or not touch it at all. A player can strike with the striker using his index, middle finger or by both these fingers of either of his two hands. The thumb can be used for backward shots.

The game begins when a player strikes at the circular pattern of pieces with the striker. The single player or the team has to strike only pieces of one single color throughout the game and pocket them as early as possible. Every player has a single chance in a round. But, if he pockets a piece, he gets another consecutive chance. The queen can be potted at any time at the game, after pocketing the first piece. Once the queen is pocketed, the respective player should immediately pocket one of his carrom men to ‘cover’ the queen. Failing to do so, the queen is put back on the board on the center spot.

According to international carrom rules and regulations, a game comprises 25 points or 8 boards (whichever comes first). Once a player or the team pockets all the pieces, he is awarded points equal to the number of pieces of the opponent’s team that are left on the board. If the winning player or team has pocketed the queen, they get an extra 3 points. On the other hand, if the player pockets the opponent’s last piece, he loses the board and also loses 3 points. Similarly, if a player pockets his last piece before the queen, he loses the board, 3 points and also all the points that are equal to the number of his opponent’s pieces left on the board. Whichever player/team gains 25 points or wins most among 8 boards, is the winner of the game.

Now that you know how to play the game, here are some miscellaneous carrom board rules which although trivial, need to be seriously considered while playing the game.

One should remember that it is easy to learn this game, however, one definitely needs a lot of practice to master carrom: one of the best loved indoor tabletop games in the world! 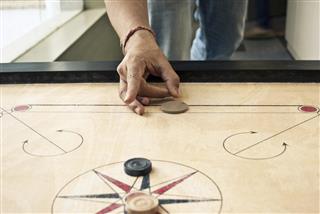 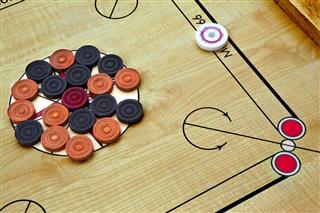 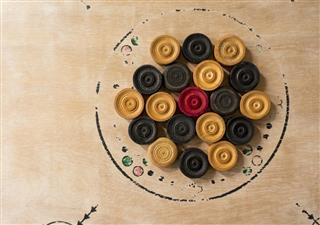