WOW Such Fun! This is How Crab Soccer is Played

Crab soccer is no child's play, even though it is a game that is enjoyed by children and adults alike! This strenuous game has some seriously strict rules, which makes the game a whole lot more challenging and fun.

Home / Uncategorized / WOW Such Fun! This is How Crab Soccer is Played 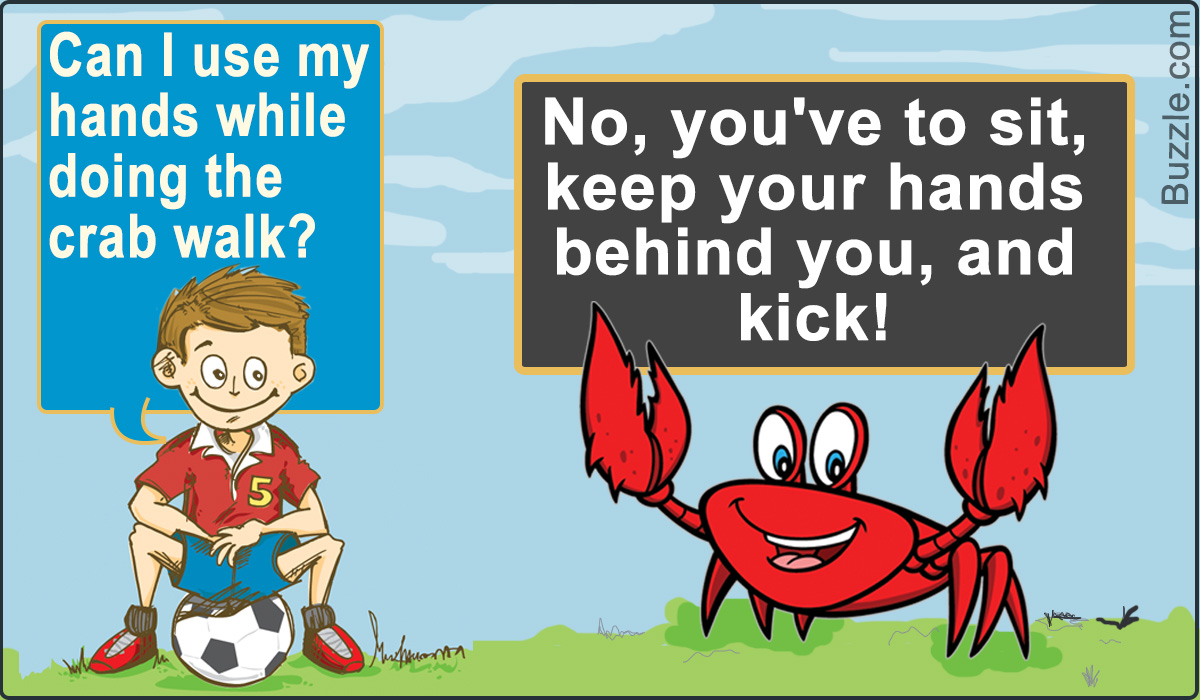 Crab soccer is no child’s play, even though it is a game that is enjoyed by children and adults alike! This strenuous game has some seriously strict rules, which makes the game a whole lot more challenging and fun.

In 2009, CrossFit Charlottesville organized a game of crab soccer, so as to raise money for building schools in Uganda

This über-fun game is played by two teams, and can be played indoors in a gym or a basketball court. All that is needed is an inflated cage ball that can float longer. Some play this game with an actual football or volleyball as well.

However, it is more challenging to use a small ball, because the participants are required to play this game sitting down. The players are supposed to use only their feet, while they rest their hands behind them on the floor.

The hands are used for pushing the body forward, while the feet are used for walking while sitting down. All this while, the torso is raised whenever the player wishes to move. This game is called so, because while seated in this position, the players look like crabs. This Plentifun article explains how to play crab soccer.

❑ A clean square or rectangular field, with no furniture, stones, or protruding items, that might injure the players.

❑ 2 pairs of cones (4 nos.), that can act as goal posts, and placed on either sides of the field.

❑ If the field is big enough, you may add 2 more optional goal posts on the remaining two sides as well.

❑ Knee and elbow pads for the goalkeepers.

★ More than one cage ball can be used if the number of participants is more, however, the goals will be added to the score of the two main teams only.

★ Divide the teams, using visual demarcations such as color-coding the uniforms, where the players wear colored shirts, socks, or headbands.

★ Appoint two goalkeepers who will be assigned their own area.

★ The players must be seated on their bottom, and should move with their torso facing up in order to do the crab walk properly.

★ The ball is placed in the center of the field, and the leader of the team that wins the toss is given the opportunity to kick-off the ball towards the opponent’s goal post.

★ The team that loses the toss must be placed 10 feet away from the other team. If the area is smaller, the distance can be reduced from 10 feet to whatever seems an acceptable distance.

★ Every time a goal is scored, the scoring team must kick-off the ball from the center of the field.

★ Whenever the ball goes out of the play area, the leader of the opponent team must kick the ball towards his/her teammates.

★ The players are not allowed to headbutt the ball.

★ Opponent team members cannot shout for a pass from the player who is in control of the ball.

★ Players are not allowed to carry the ball on their stomach or touch the ball with their hands. Such a foul will warrant a free kick to the opponent team.

★ Opponent players are not allowed to crowd and tackle the player in possession of the ball, instead, only 1-2 players can tackle the ball out of a player’s possession.

★ Players are also not allowed to kick the other participants, be aggressive, shout curses, push with their body, or use their hands while doing the crab walk.

★ The players cannot hold the ball between their feet or legs, as that will amount to the foul of foot holding or carrying the ball.

★ Nor are the players allowed to obstruct the movement of the opponent players, by grabbing their clothes, hands, feet, or by leg-locking.

★ Make one player the referee who will ensure all rules are followed, and will penalize the infringing players with penalty cards.

★ No player is allowed to enter the goalkeeper’s defending posts.

★ Scoring a goal from their own half of the field is invalid and cannot be counted.

★ Players who have broken the rules or kicked a fellow player are asked to sit outside the playing area for a specific duration.

★ The goalkeepers can touch the ball with their hands and rest on their knees, in order to defend their post.

★ The goalkeepers must not be allowed to venture out of their assigned goal areas.

★ Nor are they allowed to throw the ball from above their head. Underarm throwing is the correct approach, while the goalkeepers stay rested on their knees.

★ If the goalkeeper of one team breaks any of these rules, the opponent team will be awarded a penalty kick. This penalty kick must be taken from the center of the half-way line of the field.

Demarcate the goal limit, so that the team achieving the assigned score first, shall be declared the winner. Enjoy doing the crab walk and playing the crab soccer!