Practical Tips for Winning the Electrifying Game of Jenga

Play Jenga well, but not well enough to win it every time you play it? These tips might be able to help you become the 'Pro at Jenga' that you always wanted to be. Read this Plentifun article for a few pointers at winning Jenga. 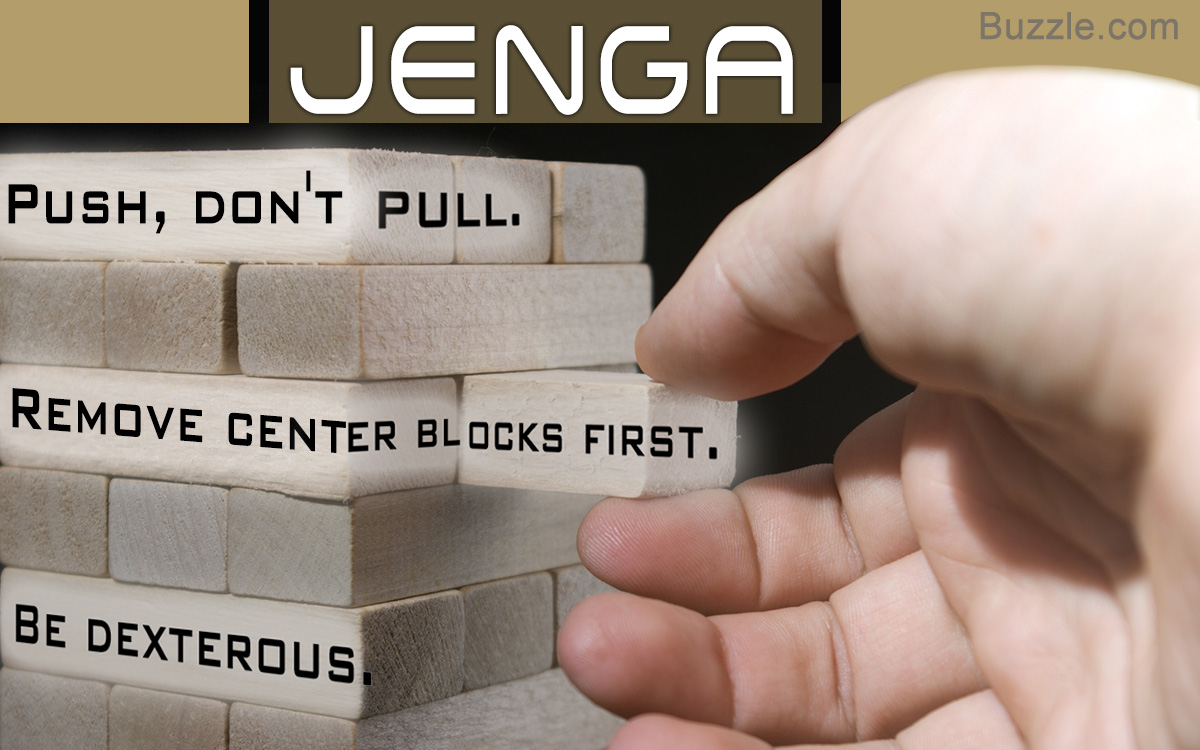 Play Jenga well, but not well enough to win it every time you play it? These tips might be able to help you become the ‘Pro at Jenga’ that you always wanted to be. Read this Plentifun article for a few pointers at winning Jenga.

For those who don’t know …

… ‘Jenga’, in Swahili, means ‘to build’, is a game that involves building a stable tower with 54 wooden blocks stacked alternately in a vertical and horizontal manner. Each player takes turns to eliminate blocks from any level of the tower and place it on the top to create a taller tower. The player who causes the tower to collapse is the loser.

An electrifying and exciting game, Jenga tests your mental prowess as well as dexterity. The game can be played by any number of players, and has no time duration to it.

Those who are familiar with the game can scroll down for some tips.

While those who are not familiar, the prime objective of this game is to build the tallest tower using only 54 pieces or blocks stacked one above the other. Each player/s receives a chance to remove one and only one block from any level of the tower (except the last and penultimate level) and place it on the top, thereby, increasing the height of the tower. A couple of things to remember here is each player/s is allowed to use only one hand while removing a block, and his/her turn is complete only when one block is removed from the bottom and placed on top.

So much so for the playing essentials. If the tower collapses during or after a move, the player causing the collapse is declared as the loser.

Now, you may have played the game at a friend’s house party, and you couldn’t get enough of it. So, you finally buy it for yourself, and now, you wish to become a pro at it. Keep the following tips in mind that are sure to give you an edge over your opponent, the next time you play Jenga. 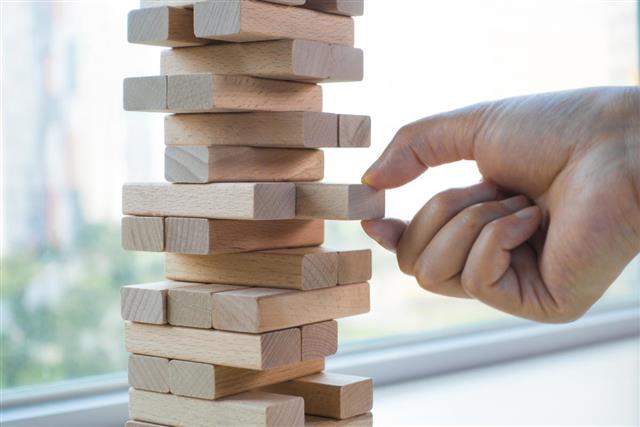 When you pull a block out, the motion of lifting the block disturbs the balance of the tower, and causes it to topple over. Whereas, pushing or gently tapping a block out, distributes the load of the tower gradually, thereby, maintaining the stability of the tower.

2.Eliminate blocks at the center first 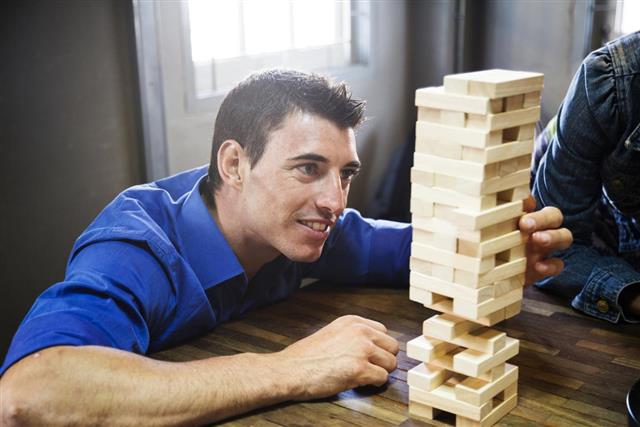 3.When you run out of center blocks, shift side blocks to the center 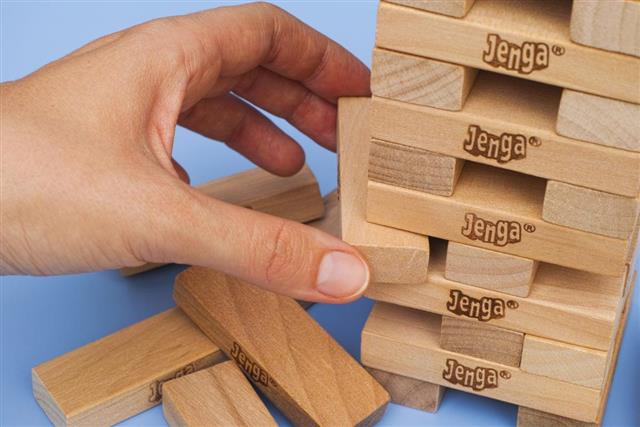 4.Out from the left, in from the right

If you eliminate a block from the right side, place it at the top of the tower on the left side. Likewise, a block from the bottom left should go to the top right. At times, where you eliminate blocks from the center, check which side needs to be balanced more, and accordingly, place the block on the appropriate side. For example, if you feel the tower is about to topple towards the right, place the block that you just removed from the center, on the top-left side of the tower.

The blocks slightly vary in thickness. Naturally, the thinner ones are less likely to bear the load of the tower than thicker ones. Shift the thinner ones to the top to ensure a stable tower. As the game progresses, the blocks that were tightly stuck at the beginning, would loosen up. Look out for those blocks, and eliminate them first.

If there is any strategy and plan to win at Jenga, then it is to focus on one single block and move at a time. In your quest to build the tallest Jenga tower, you may plan a couple of moves ahead and chart a course for your game. But your plan is sure to get altered because of the moves your opponent makes.

7.Use your non-dominant hand too

Simultaneous use of both hands to remove a block from the Jenga tower is not allowed. However, skillful movement and alternative use of both the hands, when required, not only improves dexterity of the hands, but also helps to balance the tower more effectively.

The best thing about this game is that there is no time constraint. (You could, however, devise a variation in which each participant gets only a limited amount of time to complete his turn of taking out a block from the Jenga tower; it would speed up the game and make it more interesting and exciting). Since there is no time limit, relax, breathe, and make your move. Don’t take too long though; you might ruin the moment and excitement for the other players.

When we say ‘avoid strategy’, what we are really trying to say is don’t plan multiple moves at one time. Between your current move and the next move you have planned in your head, the game will change drastically, as your opponent shifts and eliminates blocks from the tower. Every Jenga tower (every single Jenga tower!) is built differently. No two Jenga towers are the same, and for that matter, no two Jenga blocks are the same. It is not guaranteed that the strategy you applied during your last Jenga win, will ensure a victory again.

Concentrate on the game, and don’t get distracted; not only during your turn, but also during your opponent’s turn. Keep an eye out for blocks that loosen up when your opponent is eliminating blocks. Also, I asked you not to get distracted, I didn’t ask you to not distract! Everything is fair in love, war, and Jenga. Make your opponents laugh when they are trying hard to take out an extremely difficult block, talk to them, distract them, just so that they fumble and you win. You are in it to win it, right?

Your aim should be to prevent the tower from collapsing, and not building the highest Jenga tower. Maintaining stability of the tower by ensuring proper removal and placement of singular blocks would automatically lead to the creation of a taller and more stable tower. At every turn, before you decide which block you want to eliminate, test the tower first. Do this by gently tapping blocks with your fingers and look for blocks which are not perfectly stuck and can be easily removed. As the game progresses, the blocks which were earlier perfect-fits in the tower, would become loose blocks and vice versa. The trick is to continuously keep checking for loose blocks that can be easily moved, and get rid of them first, before your opponent does.

These tips might help you improve your Jenga tactics and the way you play it, but a steady hand, sheer concentration, extreme patience, and lots of practice are the keys to being a winner at Jenga. That, or a sober you and drunk and intoxicated opponents! 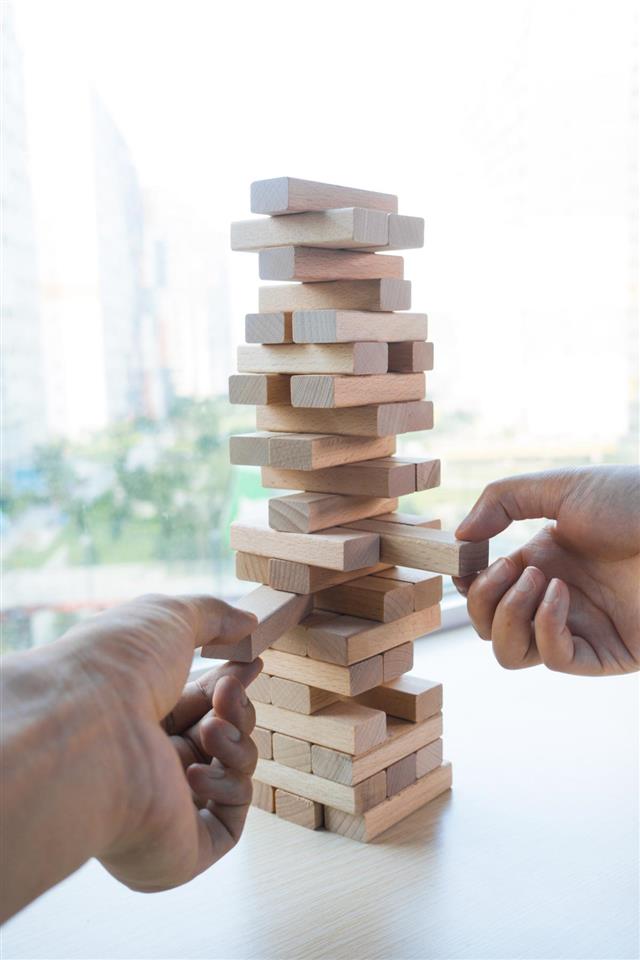 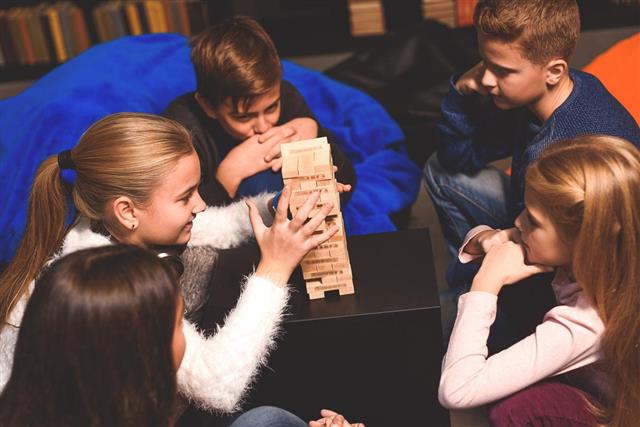