Want to Know How to Play Mancala? Follow These Instructions

If you are in a mood to play some indoor game, but don't want to break your head learning a chunk of rules and buying expensive stuff, Mancala is quick to understand and easy to play. Just find a mate to play as your opponent and you're all set. Plentifun guides you through the basic Mancala rules, and even some tips to make the equipment required to play.

Home / Uncategorized / Want to Know How to Play Mancala? Follow These Instructions

If you are in a mood to play some indoor game, but don’t want to break your head learning a chunk of rules and buying expensive stuff, Mancala is quick to understand and easy to play. Just find a mate to play as your opponent and you’re all set. Plentifun guides you through the basic Mancala rules, and even some tips to make the equipment required to play. 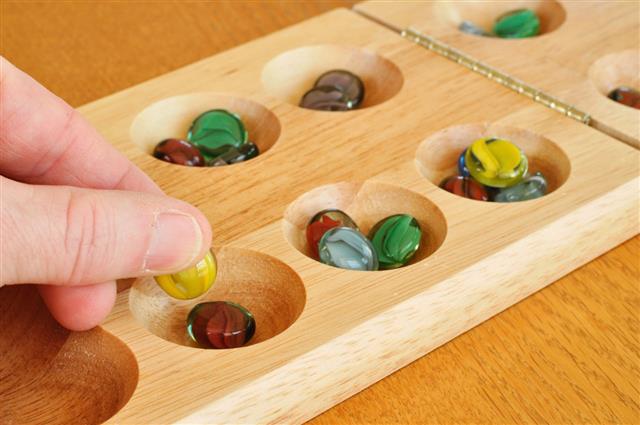 Nokia launched an electronic version of Mancala, called ‘Bantumi’, on its 3310 handsets. The company sold 126 million units of the phone, making Bantumi the most popular and bestselling version of the game.

The game’s history can be traced back to about 6th century A.D., when it was played by using pieces of pottery and by making holes in the ground. The name of the game originates from the Arabic word naqala, which means ‘to move’. Mancala is not one game, but a category of similar kinds of games. There are as many as 200 invented games of Mancala. Some of the most popular ones are ‘Bao La Kiswahili’, ‘Chisolo’, ‘Congkak’, ‘Kalah’, ‘Oware’, and ‘Toguz Korgul’. Mancala games are played with holes or pits dug in the earth or carved in stones, as was done by our ancestors. A more modern approach suggests using a wooden board, sizes of which vary according to different games. For playing pieces, seeds, beans, stones, cowry shells, colorful beads, etc., are used which throughout the game are placed and transferred in different holes.

If we are specifically talking about one game, then it’s ‘Kalah’ that is mostly played in the U.S. and Europe, where it is simply called Mancala. Let’s take a peek at the objectives, rules, and strategies of this ancient game.

Each player competes with the other to collect as many seeds as possible. The player with the most seeds in the end is the winner.

Each player controls six pits on his/her side of the board. A bigger pit on the right of each player, known as the player’s store, is to keep the score of the number of seeds collected.

At the beginning of the game, 3 seeds are placed in every pit, except the stores.

On every new turn, a player removes all the seeds from any one of the six pits, and drops one seed in each succeeding pit in a counter-clockwise fashion.

If the last dropped pit is the player’s store, then the player gets another turn. A player in a turn can drop in his own store and the opponent’s pits too, but he cannot drop any seeds into the opponent’s store.

When one of the two players exhausts all the seeds from the six pits, the game ends. The other player then shifts all the remaining seeds in his/her store; the player with the most seeds is the winner.

Make a Mancala Board at Home

Not having a Mancala board doesn’t mean that you can’t play this fun game. Here are some tips and tricks to make one at home.

Make One from Egg Cartons

➜ You will need to connect two 6-egg cartons to make 12 holes on either side.
➜ Alternatively, you could look for a 12-egg carton, as shown in the illustration.
➜ For the players’ stores, staple or stick small plastic containers or glasses to the edges.
➜ That’s it; you’re done making a Mancala board at home.
➜ You could stick thick duct tape in the center, so that you can fold it neatly after play is over (for 2 cartons).

Make One from an Ice Cube Tray

➜ A standard ice tray in your fridge would have 8 slots on either side.
➜ Take an old one if you have, or buy one as they are super cheap.
➜ You could just exclude the extra holes as they are of no use.
➜ Yipee! Done making another board.

A very quick and easy-to-play game, Mancala is great when traveling or camping. A lot of digital versions of the game are on the mobile app stores in the name of ‘Mancala’ or ‘Oware’; go check them out. Have fun and keep playing! 🙂