Quoits has been a popular pub game for a very long time. Today, there are many versions of this game, and quoits aficionados tend to take their love for the game very seriously. So, here are the rules of the game for those who would like to give it a try.

Quoits has been a popular pub game for a very long time. Today, there are many versions of this game, and quoits aficionados tend to take their love for the game very seriously. So, here are the rules of the game for those who would like to give it a try.

Quoits had become so popular in England that King Edward III and King Richard II sought to ban it in order to encourage people to take up archery.

A traditional game of quoits is played by throwing metal rings from a fixed distance close to or over a metal spike. These metal rings are called quoits (hence the name), and the spike is sometimes called a pin or a hob.

Initially played in pubs, this game is believed to be a formalized version of a similar game played with horseshoes. This game is said to have originated in Greece. According to historians, in ancient Greece, those who could not afford to buy a real discus made one by bending horseshoes. The aim of this game was to throw the so-called discus the furthest. Later, the Roman army helped spread this game across Europe.

It was only after a few centuries that this game underwent a delineating change when a metal or a wooden peg was lodged in the ground with the sole purpose of making it a target to be aimed at. Today, there are numerous versions of this game depending on which part of the world it is being played.

Here, we state the rules and instructions of how to play quoits according to the specifications of the tournament held by the United States Quoiting Association.

Layout of the Quoit Court

The playing area of the court is a flat rectangular land that is 30 feet in length and 10 feet in width with two central pits. The pits can be a square or a circular patch of land made of clay or dirt that are around 36 inches in diameter (for circle) or 3 x 3 feet in dimensions.

How to Play the Game

▶ This game is played between two teams of either two or four players.

▶ This version of the game uses quoits that weigh about 4 pounds.

▶ When only two players are competing, both pitch quoits from the same side of the pitch using the same foul line.

▶ Players take turns to pitch the quoit; a toss of the quoit is used to determine which team or person plays first. The rules for this is pretty much the same like that of a coin toss, the concave side of the quoit is called “she”, and the convex side is called “he”. The winner may choose to pitch first or let the opponent choose first.

▶ The quoits are pitched alternately, every player of a team has 2 quoits each and is known as a “round”.

▶ The aim is to earn 21 points; the participant or team that earns 21 points first wins. However, there is a win by two rule in the tournaments held by the USQA, where if the score between two teams is 21-20, the game must go on until a team achieves a 2-point advantage.

▶ If the score between two teams is 11-0, then the match is stopped, and the participant with 11 points is declared the winner, this is referred to as a whitewash.

Only one team scores a point after all four quoit have been pitched. There are usually three possible scenarios for a player to gain points.

Point: When a quoit is at a distance less than a quoit’s diameter, and it is closer to the pin than that of the opponent. A Point scores 1 point.

Leaner: When a quoit leans on the tip of the pin with one of its edges resting in the clay. A Leaner may earn its team 2 points, a Leaner beats a Toucher. If a team pitches two consecutive Leaners, the second one earns them an additional point.

Ringer: When a quoit lands over the pin with its edges encircling the pin. A Ringer is worth three points. If a Ringer lands on an opponents ringer, then it rewards its pitcher with 3 points for each Ringer. A maximum possible score of 12 points is possible. A Ringer always beats a Leaner.

There are certain scenarios where no point is earned. When the two quoits of the opponents are equidistant from the pin.

Woody: When the quoit bounces off the wooden box that demarcates the pit.

Grounder: When the quoit slides or bounces off the ground outside the pit and rolls into the pit.

She-Quoit: When a quoit lands upside down in the pit or on the hob; when a quoit leans on the pin with its concave side on the top; when the quoit is wedged in the ground at an angle greater than 90°. A She-quoit is not usually removed from the ground (as it can be flipped with another quoit).

The foul line is ten feet from the pit. The pins are usually numbered if the quoits lands on a pit of particular number; it earns its pitcher those many point. The first person to 230 (or 90 for a shorter version) points wins. The great part about this game is that any number of players can participate.

This Pennsylvanian version of the game uses two one-pound rubber quoits per player, which are pitched at a short metal pin mounted on a slab of slate. Other rules are similar to the ones described above.

This is version is traditionally played in the United Kingdom. Here, the foul line is 33 feet away from the pins, and the quoits is slightly heavier, 5.5 pounds. This game is sure to test the strength of its players.

If you thought the Northern game was tough, then this version sure ain’t going to be any easy. This is an old game played in Wales and Scotland. Here, the distance between the pin and foul line is almost 54 feet, and the weight of the quoits is about 11 pounds.

You can even devise your own variation to incorporate all players or the equipment that is available with you. All you need is a bit of creativity. Happy Quoiting! 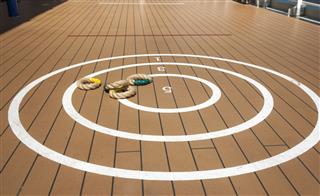 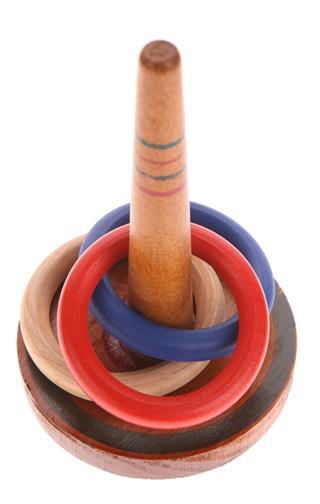 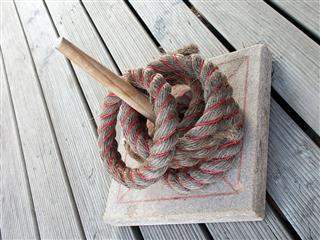