Rules to Play the Popular Board Game – Ludo

Ludo is a very simple game which can be played by 2 - 4 players. It is easy to play and understand, which makes it popular among children. This game has some rules and regulations that you need to know.

Home / Uncategorized / Rules to Play the Popular Board Game – Ludo

Ludo is a very simple game which can be played by 2 – 4 players. It is easy to play and understand, which makes it popular among children. This game has some rules and regulations that you need to know.

Ludo is a simpler form of the game Pachisi that originated in ancient India. The famous 6th century Buddhist caves of Ajanta, India, contain paintings that depict this board game.

Ludo can be played by 2 to 4 players with each player having a set of 4 pieces (usually identified by color) placed in the starting zone, which is at the left corner for each player. By rolling the dice, players race their four pieces on the board from start to finish, while trying to avoid being killed or captured by their opponents.

The main objective for each player is to move all his/her tokens or pieces to the finish before his/her opponents. Of course, en-route there are some more obstacles that the player has to overcome. Go through these step-by-step instructions to get a better perspective on how to master this easy game.

Overview of the Board

The Ludo board has a combination of typical colors bright yellow, green, red, and blue. Each player chooses a color and has four tokens/pieces of his/her corresponding color.

The board is normally square with a cross-shaped game track on it, with each arm of the cross consisting of three columns of squares – usually six squares per column.

The middle columns usually have five squares colored, and these represent a player’s home column. A sixth colored square not on the home column is a player’s starting square.

At the center of the board is a large finishing square often composed of triangles in the four colors atop the players’ home columns. Thus, looking like “arrows” pointing to the finish.

Each player gets a chance to roll the die, the highest roller (the one who gets the 6) begins the game. The other players start rolling the die in a clockwise direction.

To enter a token/piece into play,or from its staging area to its starting square, a player must roll a 6. If the player does not roll a 6, the turn passes to the next player. Once a player has one or more tokens in play, he can choose any one of the tokens in play and move them forward. The number on the rolled die will determine the number of squares the chosen piece moves forward.

When a player rolls a 6, he/she may choose to advance a token already in play, or alternatively, he may enter another staged token to its starting square. The rolling of a 6 earns the player an additional (“bonus”) roll. If the additional roll results in a 6 again, the player earns another additional bonus roll. If the third roll is also a 6, the player may not move a token, and the turn immediately passes to the next player.

Now, once a token travels around the entire board and reaches his home stretch or home column, it has to be moved towards the home. For this, a player has to roll the exact number the token has to move in order to reach home. For example, if you roll a four, and your token requires to move only three squares, you have to move another token or pass. The first player to move all his tokens to the finishing square wins the game.

Due to the popularity of Ludo, the world over, many variants exist. While some focus on speeding the start and end of the game (permitting the movement of a token without a 6), others have a safe square marked on the board that enables players to secure their tokens from their opponents by landing on that square. Though the rules of Ludo may suggest that winning requires luck more than skill, it does have its fair share of strategy and excitement. If you haven’t yet played this game, we would suggest that you certainly do. It will surely lighten up a dreary afternoon or family get-together. 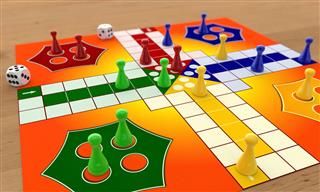 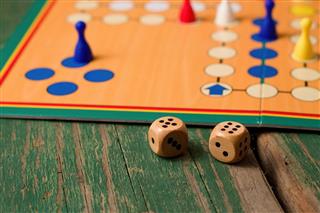