How to Solve a Cryptogram: Tricks You’ll Wish You Knew Sooner

Cryptogram, being one of the earliest methods of encrypting simple text into cipher, and which was once used to send secret messages, is now used in word puzzle games. Train your brain to decipher some challenging codes with these easy and useful tips that show you how to solve a cryptogram.

Home / Uncategorized / How to Solve a Cryptogram: Tricks You’ll Wish You Knew Sooner 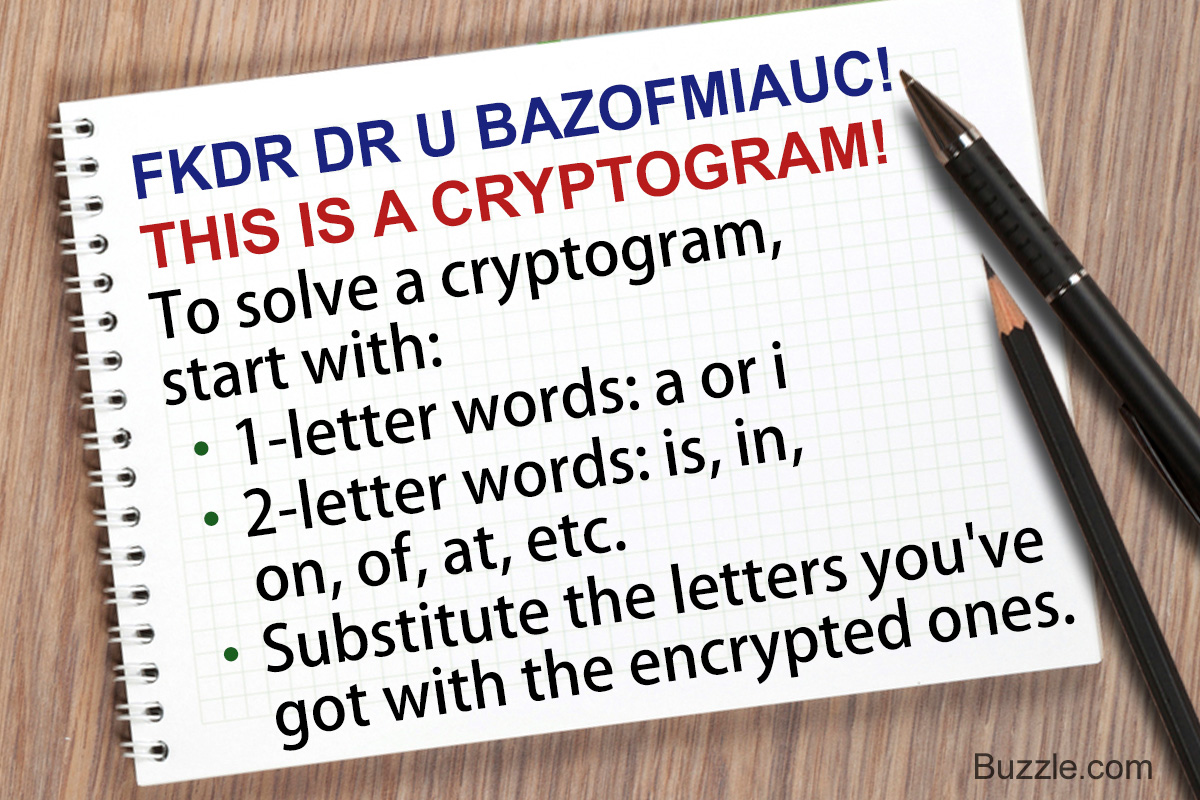 Cryptogram, being one of the earliest methods of encrypting simple text into cipher, and which was once used to send secret messages, is now used in word puzzle games. Train your brain to decipher some challenging codes with these easy and useful tips that show you how to solve a cryptogram.

Did You Know?
Cryptograms were first made by Julius Caesar in the 5th century BCE!

More and more brain teasers and puzzles have been created over the ages, and evolution has given a different dimension to the level of difficulty, testing our minds to reach an unmatched excellence. Cryptograms can range from being very easy to very difficult, but there are certain rules by which cracking any cryptogram code can become solvable if not easy!

Precision comes with practice, and each of these puzzles with a different logic behind the encryption of sentences takes time to understand and decipher the code. The more you solve these, the more you will start understanding the patterns used to substitute the letters with other letters or with numbers.

The word THAT which has the same letter at the start and end can have a cryptogram that looks like XGHX.

Look for digraphs
Look for apostrophes

If a word contains an apostrophe, there are only few letters that can come after that, viz., S, T, D, M, LL, VE, or RE.

Look for double letters
No word is complete without a vowel

The most common letters used in the English language are E, T, A, O, N, I, and S. These letters might get repeated in many of the words in a sentence.

If your sentence contains question marks, then try fixing interrogative words like WHEN, HOW, WHAT, WHO, WHERE, WHY, etc.

Look out for commas

Generally, commas are followed by words like AND, BUT, OR, SO, BECAUSE, AFTER, HOWEVER, etc. So these words can be given a try before the commas.

Scratch out the impossible letters

After completing a part of your sentence with only one or two words left, you have an idea of what letters could possibly fit in. If the letters have been used already, scratch them off your list so you can clearly see what’s left out.

Apply some logic too

After solving half the words in your sentence, you will start seeing the possible words that can fit in with the given phrase.

Since you now know the tricks to solve a cryptogram, why don’t you try these out? Click on the images to get a print out of the puzzle. The answer to each puzzle is given below. Remember not to scroll till the end unless you solve these.

#1 – Early to bed and early to rise makes a man healthy, wealthy and wise.

#2 – The only normal people are the ones you don’t know very well.

#3 – Forgiveness is the fragrance that the violet sheds on the heel that has crushed it.